The sound compositions which are part of the cycle Artificial Soundscapes are trying to establish a kind of Acoustic Art “in between”, that is beyond all traditional categories and concepts as represented for instance on the one hand by the autonomous work of art and the absolute (art) music and, on the other hand, by pure collages/montages of sounds, up to the acoustic design of functional ambient music. It is meant as the radical intent to create multilinear, artificial SoundStructures by working exclusively with original sound material appertaining to the following three sound categories: nature, animal and man, while continuously molecularizing and transforming the real sound. These SoundStructures will, in the first place from their intrinsic core, originate self-impelled vibrating sound energies in self-intensifying loops, so to speak intensity streams of NoiseSoundParticles. It will amalgamate de-subjectivized expressive matters and chains of affects to build manifold heterogeneous SoundMilieus. 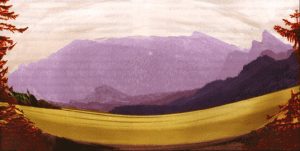 The temporary sound blocks, practically a blending of the three basic components (nature, animal and man) with their circular segmentarities and continuously oscillating, stratified intensity, represent the most diverse zones of intensity of nature´s, animal´s and man´s continuously fluctuating evolution/development to sound.

The sound elements are of exclusively “natural” origin (that is, machine noises, instrumental or synthesized sounds are dispensed with!). The artificial aspect of sound composition is only evident in the digital “processing” of all parameters of the organic sounding sources that have been used. The artificial element of these sound compositions is not present in their sounding components but only in their transformation.

The heterogenes between reality and virtual reality operate only in a symbiotic diversity and blending, which is transformed into a “generation of transitions” with flexible edges. These again form a network which extends over an amorphous continuum, creating an unpalpable atmosphere, where unformed materials differing above all in their velocity and their movement in space and entering certain individualized SoundStructures according to their connections or mobility relations, “dance about”.

Organic SoundMilieus emerge from the “chaos”, vibrating sound blocks defined by space and time, which are formed by a permanently varying, periodic repetition of the components nature, animal and man, build an inner milieu made up of connecting elements and connected substances. The individual sound events the artist has come upon are themselves transformed into oscillators, which again are transformed into interactive forces to allow a fluctuation of affects, expressive matters, flowing forces, relations of velocity/slowness, different densities or spatial characters.

The sounding matter ceases to be a substance matter to become an expressive matter!

The “pure” expressive matter creates through a freely floating, variable and complex system of counterpoints/counterlines a transversal, mobile sound block between noise, sound and tone in the multilinear structure of the horizontal soundlines (such as frequency, rhythm etc.) and the vertical sound spaces (such as. resonance, timbre etc.). Horizontal layers and vertical cuts arise.

Small, ritornello-like motives (loops!) no longer relate to themselves or to a landscape, a bird or a child, but contain and develop inherent landscapes, birds or children respectively, that do not actually exist in reality. Virtual soundscapes are populated by transformed, rhythmic sound figures generated when you are no longer confronted with the simple situation of a rhythm connected for instance with a natural element, an animal, a certain person, a melody or an impulse. Now, the rhythm itself constitutes the complete figure and thus it can either remain constant, or wax and wane as individual components are added or taken away, as duration is prolonged or abbreviated or as dynamic is increased or decreased.

The soundscape emerges as an ensemble of expressive matters in a stratified sound system of the rhythmic figure with an “infinite” number of transformations.

The transformation of “music” into nature/animal/man succeeds in the same measure as the animal or the person is being transformed into something different: “pure” line, “pure” sound, “pure” colour, “pure” movement, “pure” rhythm, “pure” condition etc.

But how can we impart consistency to the available original sound material that has been collected, carefully reviewed and selected in the course of several years to make it release inaudible/unthinkable energies and virtual energies and translate them into sound? I think that two procedures are of major importance, both of which I will subsequently describe in detail: molecularization and transformation.

Molecularization is realized above all by means of a digital sound processor, the sampler, which among others, in the manner of a high efficiency microscope, lends audibility to the intrinsic structure of a sound and makes it available – to an extent which hardly fifteen years ago was inconceivable – to the artistic work process. In my opinion, the revolution in the field of electroacoustic music which may be triggered by the artistically motivated employment of the sampler with consequences that cannot be assessed at present, has not really started yet. We may find ourselves just at the beginning of a development in the course of which the artistically transformed, molecular intrinsic structure of a “natural sound” will allow us to listen to so-called “reality”, telling us that (maybe) all kinds of evolutions are of molecular character.

The molecular level enables communication between the elementary and the cosmic level – even more so, as it causes a dissolution of the form, which connects the most diverse longitudes and latitudes, the most varied velocities and slownesses and thus secures a sound continuum, because it expands the concept of variation beyond any formal boundaries.

A form plan should be substituted by a consistency plan!

Transformation of molecularized sounds is realized, apart from the sampler, especially by the so-called digital effect processors, which are highly responsible for the transformation of the substance matter into a purely expressive matter via the transcoding of their conventional sound characteristics and substantial meanings. This takes place mostly by the application of an extremely varied and permanent transformation of the usual parameters “where/how/when” (such as frequency, amplitude, timbre, duration and location of the sound) which give rise to artificial tone lines and sound figures as well as mutated timbres and sound rhythms and even virtual resonances and sound spaces.

Permanent mixing of the original sound materials with their self-generated “mutations as it were” evoke new regions displaying continuous streams of energy and intensity, which, beyond pure realism or pure abstraction create artificial mixings of combinations which can only thrive in these specific IntermediateMilieus.

Sound spaces which appear to be dynamic in their microstructure and static in their macrostructure with their variable, artificial “sound flocks” and heterogeneous/organic “swarms of noises” form an enormous consistency level, which with its different variables of speed constantly sweeps along forms, functions, figures and elements, isolating particles and affects to form transversal, dynamic sound blocks between noise, sound and tone by blending them together.

Digital sound processors create in self-impelled self-intensifiying loops permanent mutations of sounds. Of these, the sound artist forms virtual, organless bodies of sound. In these bodies, sound and effect processors serve as abstract machines which constitute the ideal sound instruments and thus the congenial partners of the visionary sound artist. The abstract machine represents something like a complex of interfaces, which penetrate organic structures such as “water”, “insect” or “female voice” to record, molecularize and transform the variations of these structures.

Sound and effect processors may among others by the application of so-called “sound morphing processes” open the structure of a species for a different structure which is located between species. The bubbling of water may mutate to the abstract rhythmic sound figures of supposedly percussive vocal sounds, or the chirping of insects may be transformed to build matrix-like SoundTimbreRhythmGrids, which again themselves serve asan acoustic co-ordinate system for substantially transformed birdsongs.But these sound and effect processors may also close off a structure andmake it rotate in itself, or even do without any kind of structure to produce a gap opening towards the universe where released sound atoms rotate freely on virtual vanishing lines in virtually “chemical” conditions of action and reaction.

However, in all of these sound procedures, the most recent digital technology is not used for sound production per se and, to use an ecological term, to produce artificial sound elements which are difficult to degrade or not degradable at all – elements, which often enough represent only one more contribution to worldwide acoustic pollution. Quite the contrary is true, as the most recent technological developments in the field of music help the sound artist, after he has carefully examined whether or not they are serviceable for his/her artistic work, to carry out the analytic screening and examining of given organic sound materials with the objective of recording and investigating their self-impelled generation processes and intrinsic molecular structures and making them available for the artistic work process.

It is just with the assistance of digital computer technology that an artist may actually – and hopefully – succeed in making his/her sound compositions evoke an acoustic visionary intermediate plateau at the interface between man and nature, to ignite in the listener’s perception, to speak in Bloch’s terms, this “utopic spark”, which may create, at least on an acoustic level, an image of a positive anticipation model for the relationship between man, nature and technology.

*) Many terms and modes of thinking used in this text are highly influenced by or taken directly from the writings of the French philosopher Gilles Deleuze and put into new contexts in the best “rhizomatic” sense. Similarly, in the sound compositions of the project “Artificial Soundscapes “, Deleuze’s “thinking aura” is present in manifold ways, and its “music” is indebted to Deleuze for many inspirations. Consequently, the whole project Artificial Soundscapes is most heartily dedicated to this great and visionary thinker.

There are two versions of each sound composition which is part of the cycle Artificial Soundscapes: